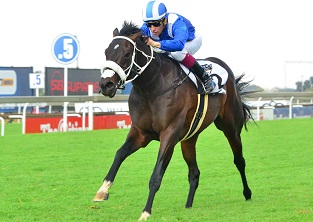 The Sun Met on 1 February will be Hawwaam’s last race in South Africa.

This has been confirmed by trainer Mike de Kock who said the son of Silvano will go into quarantine two weeks after the Met. “He will then go to Mauritius where he will spend three months and then on to the UK,” said De Kock.

At this stage, there are no plans to send him on to Australia where De Kock will be looking to set up camp in the next 18 months.

“All I can tell you is that Sheikh Hamdan wants him out of South Africa as soon as possible.”

At this stage De Kock does not know what will happened to Hawwaam once he arrives in the UK. He just shrugged his shoulders when asked if he would continue training the four-year-old in England.

Meanwhile, Hawwaam remains 16-10 favourite for the Sun Met and is looking good despite his disappointing run in the L’Ormarins Queen’s Plate. De Kock’s advice? “Just put a line through that race. Things did not go his way.”