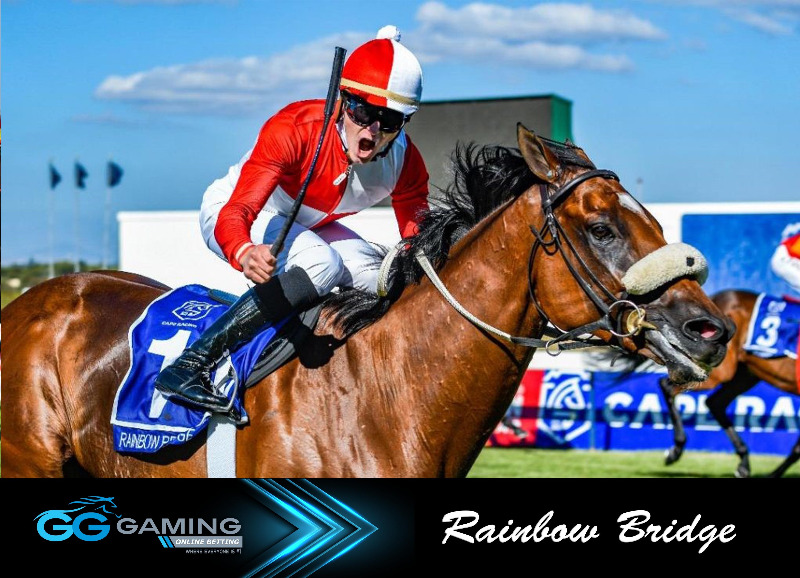 The news of Rainbow Bridge’s sudden retirement from racing invoked a flood of emotions and tributes, writes Gary Lemke for GGGaming.bet

Do you allow yourself to shed a tear in sadness, or do you see if you’ve got a bottle of bubbly left from the New Year’s celebrations and pop the cork? Ultimately I went, in vain, to look for that bottle of champers. A lot of the reports I read spoke of the sadness and regret at his retirement. I'd rather go for the bottle half full than half empty approach.

Racegoers, punters, and horse lovers should be celebrating the fact that we got to experience the best of Rainbow Bridge in his racing years. Now aged seven, those injuries and niggles have caught up with him. Like they do with the very best athletes in the world. Just ask Roger Federer. When Father Time taps you on the shoulder you can’t turn back the clock.

Rainbow Bridge’s last run was in last week’s L’Ormarins Queen’s Plate. There he ran a game third behind the impressive Jet Dark, but it continued a remarkable career of consistency.

In 26 career starts, Rainbow Bridge won 11 times, including the prestigious Cape Met twice in the last three years. He is the reigning Equus Horse of the Year and he finished unplaced only twice in those 26 starts. Along the way, he picked up R8.2-million in stake money. That’s the stuff of fairy tales and stories like this don’t come around often. In fact, probably the closest horse he can be compared within the last 10 years of those who stuck around and raced in South Africa would be Pocket Power.

Unfortunately, like Pocket Power, Rainbow Bridge will go into retirement to live out his days on the farm – ‘Pocket’ died last July at Hemel ’n Aarde – and he’ll be treated like royalty at Mary Slack’s Wilgebosdrift’s farm.

Both ‘Rainbow’ and ‘Pocket’ were multiple Grade One winners but both were geldings, which meant they couldn’t go on to become stallions at stud.

However, Rainbow Bridge’s dam (mother) will continue to be regarded as something of a phenomenon. She had three foals, Rainbow Bridge, Hawwaam, and Golden Ducat, and all won Grade One races. That’s an incredible and possibly unique bloodline.

While Rainbow Bridge had been entered for the forthcoming Cape Met, his trainer Eric Sands decided to make the call. Or at least call the gelding’s owners and breeder and get their final decision as to continue racing him after he jarred his fore (right front) knee during last week’s Queen’s Plate.

“All good things must come to an end,” owner Mrs. Norma Rattray said.

Rainbow Bridge had started his career in the blue and yellow colours of the late Chris Gerber, who died in October 2018, three months before his beloved galloper won his first Met in 2019. “I have a lot of people to thank,” said Sands after that race, “most of all Chris Gerber, who will have been watching this. We left a gap for Chris on the podium photo, if it wasn’t for his patience with Rainbow Bridge we may not have been here today.”
Asked then about Rainbow Bridge’s temperament, Sands said: “He’s a piece of cake at home, you can put a baby in his box. It’s only when he gets on the float that he starts playing up.”

Less More
1 day 22 hours ago #833473 by naresh
naresh on topic Celebrating a true champion
If you a horse racing journalist or a writer for a bookmaker you should at least check the archives.

Although I was not a Legal Eagle fan he will definitely be nearly on the top of list of horses that raced exclusively in South Africa in the last 10 years. Beach Beauty from the fillies and mares.

Do It Again still going strong is another solid performer.

All the best to Rainbow Bridge.