Cape Racing together with Hollywoodbets, is excited to announce a new incentive structure to be known as RaceCape. RaceCape is an innovative programme designed to boost and incentivise increased racehorse ownership in the Western Cape. The obvious benefits include enhanced field sizes, boosted betting turnovers, further opportunities for the Cape’s outstanding community of racehorse trainers, increased employment prospects for grooms and work riders, as well as all related and ancillary horse racing services.

Cape Racing is delighted and privileged that Hollywoodbets has come on board as the headline sponsor of the RaceCape initiative.

Devin Heffer, Hollywoodbets Brand and Communications Manager, said of Hollywood’s backing of RaceCape, “We are proud to be associated with such a progressive initiative, that will not only go a long way to reinvigorating racing in the Cape but will also result in enhanced job security and job opportunities for those in the region. Furthermore, the “out-of-the-box” thinking deployed by Cape Racing in developing this programme is consistent with the innovation that we at Hollywoodbets regard as a core part of our DNA.” RaceCape will launch with effect from 1 September 2022. The core aspects of the RaceCape incentive scheme include, amongst others:


The key highlights of the RaceCape incentive scheme are laid out in the table below: 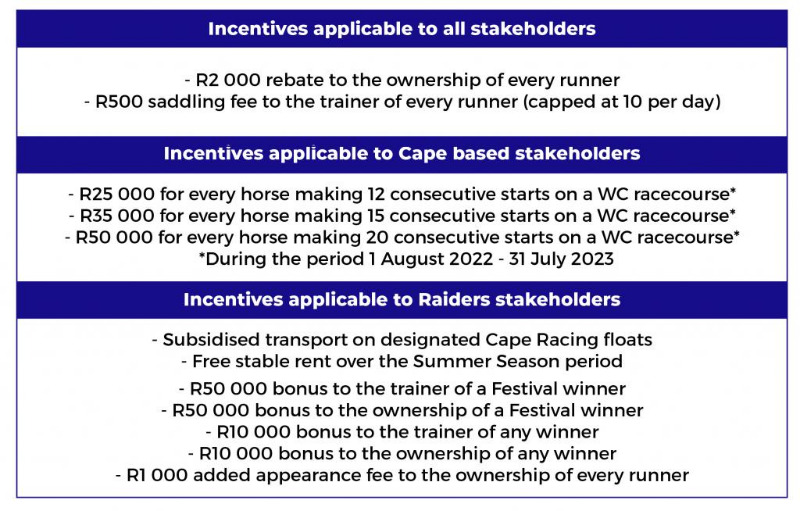 Head of Racing Operations for Cape Racing, Justin Vermaak explained, “This has been top of the agenda since day one of taking on the role and it is a testament to the team at Cape Racing that we have managed to confirm the roll out of this programme in just two weeks. The RaceCape incentive scheme should have an immediate effect on field sizes and will encourage more regular running of horses. More importantly, however, is the longer-term effect on the general horse population. This, combined with planned increased stakes levels, will positively impact the economics of ownership in the Western Cape. Furthermore, this programme will provide meaningful cash flow benefits to our trainers.

“It is top of our priority list to stop the loss of lower rated horses from the province, and we believe that these two mechanisms will be a major positive in that battle. Focus on growth of our smaller stables is paramount to our plans going forward and I believe that this will be a major lift for them. The owners’ part of the appearance fee will be paid directly to the trainer, who will in turn credit the owners’ account in the form of a rebate. This will materially improve cash flow for the smaller yards. The industry, particularly in the Cape has seen the departure of too many smaller trainers. This trend needs to be arrested. The generous bonuses and subsidies on offer for raiding trainers are designed to entice more visitors to the Western Cape, which will have a resultant impact on field sizes.

“I would like to thank Hollywoodbets for their sponsorship of this programme. They are securing the future of the sport with their backing of the industry on so many levels and it is a privilege to have their name associated with this initiative.”

Hopefully we will get field sizes like we see at Fairview!
Last edit: 6 days 22 hours ago by Sammy Silver.

Western Cape has no online website. This is where they lacking. They only getting their take out from the branches and agencies in Western Cape and I think Namibia. Also from whatever agreement they have signed with 4Racing and Gold Circle. I can be a resident in Gauteng but can have a Tabgold account and a resident in KZN can have a 4Racing account.

If I wager a bet directly through Western Cape they will have the full take out if they had an online site for their racing. They will also receive commissions for all other bets wagered in other centers including foreign jurisdictions dependent on the agreement with the other operators.

They also losing out enormously on soccer pool bets of the people in the Cape Flats, Khayelitsha, Langa and many other places wagered through the Tote via online platforms. Even Gold Circle has Track and Ball to wager Fixed Odds betting through their website and branches. Their biggest mistake was selling Betting World. Western Cape needs their own sports betting website with fixed odds betting and pari mutuel betting.
Last edit: 6 days 21 hours ago by naresh.

Less More
4 days 22 hours ago #847730 by Saint T
Saint T on topic CAPE RACING LAUNCHES NEW INCENTIVE SCHEME - RACECAPE POWERED BY HOLLYWOODBETS
An impressive start by the new kids on the block – hopefully this initiative does weaponize the smaller stables in the Cape.

The elephant in the room are the big(ger) stables in the Cape that need to be de-weaponized to make Cape Racing more sustainable. Definitive steps need to be taken to achieve this, in due course, otherwise the dominance and unfair competitive advantage of two or three stables in the Cape will continue to kill the game.

Well done to HWB, Bortz and the Cape Racing Team – your initiatives will definitely receive support from owners (and trainers) from up north.

Less More
4 days 22 hours ago #847733 by ElvisisKing
ElvisisKing on topic CAPE RACING LAUNCHES NEW INCENTIVE SCHEME - RACECAPE POWERED BY HOLLYWOODBETS
Does HONG KONG racing ( & maybe a few other jurisdictions ) not limit the number of horses per trainer......to make the playing fields LEVEL ? ....... This type of approach needs to be implemented into CPT a.s.a.p.

EVERY trainer in CPT needs to have a spread of DO IT AGAIN Horses ( TOP ) , pinnacle , A,B.C.D.E & maiden, 2Y.O. division horses in their arsenal
The following user(s) said Thank You: Saint T