Less More
10 months 3 weeks ago #820490 by PeterD
PeterD on topic Black Swan Stud Busy few days ahead
A disappointing weekend.
Montfort compounded badly. Fair run by Veni Veni Vicci first run out the maidens, beaten just 2 lengths in a competitive field. Perhaps this run came a bit too soon just 2 weeks after previous. Understated they went a crawl, and I’m surprised that Ferraris did not get going earlier, as he is an out and out stayer and was never going to feature trying to outsprint them in the straight off that sort of pace.
Gentleman very green - jockey spent most of his energy trying to keep him straight. Will hopefully come on a heap from that, and showed reasonable speed and a nice action.

Some consolation that Understated’s race was won by a daughter of Elusive Fort. He also sired a winner and a second at Kenilworth for veteran trainer Greg Ennion, who had a good day, - saddled a smart double as well as two seconds.

An interesting winner was Starrywinternight in race 2 at Turffontein. He is the first foal of Elusive Stars, which was Elusive Fort’s very first winner, and also the first of his progeny to earn black type running 3rd in the listed Perfect Promise Stakes for 2yo fillies. She was bought as a yearling by the late Ronnie Sheehan for just R5k, and he was then able to sell a half share in her for R200k!.
This is the 4 th winner for Elusive Fort as the damsire, from just 6 runners.
The following user(s) said Thank You: Dave Scott, Lionel

Less More
10 months 3 weeks ago #820491 by Prish007
Prish007 on topic Black Swan Stud Busy few days ahead
Thank you Peter for all comments and thoughts. Some excellent performances. All the best for the future and keep the thread going.

Less More
10 months 3 weeks ago #820624 by PeterD
PeterD on topic Black Swan Stud Busy few days ahead
The winter weather is back again in CT this week. Quite a bit of rain on Monday night and this morning, and more forecast.
The course dried out last week, so should be handle to handle it unless a serious storm develops.
Four runners for the stud at Kenilworth tomorrow (Wednesday):
Versailles in race 1. Two fair sprints under the belt, and now goes 1400m which should be to her liking. The older Jetrix is the stable elect, and Versailles has to overcome a wide draw. An interesting contest with 5 two year olds taking on 5 older fillies. I will be happy if she runs a place this time, but should not be a maiden too long.
Exceeder and *Cape Point meet for the fourth time, and the former looks the better horse. Both were a bit disappointing over the 2400m last time, and now go 1950m against much the same competition as their last couple of runs. Neither draws well, but both are in with an ew shout in a fairly open race.
Major Attraction is a smart, improving filly going for her hattrick over her favourite trip of 1400m in race 7, and is the stud's best hope for a winner on the day. She gives the Ladies Mile on Saturday a miss to run here, and from the plum draw can score her 5th win from just 13 starts, although facing her toughest test so far.

On Thursday, Major Winter returns from a break of a few months since winning his maiden, in the 8th race at Vaal. He looks fairly handicapped, and has obvious scope for improvement having only his 5 th start. Has the benefit of a good draw, and if fit enough must have an ew shout.

On Friday, *Mistress of Means runs in the 5th at Fairview. A tough draw of 10 to overcome in a full field, but she again gets the services of Richard Fourie who won a good race on her last time, so we are hopeful of another good run.

As I write this, Hey Georgeous and Queen Theodora have given Elusive Fort the exacta in race 4 at the Vaal. As pointed out by Sylvester, Hey Georgeous is his 99th win for the season.
Unfortunately, Kommetdieding drew in the bush in the July.
The following user(s) said Thank You: Dave Scott, KitKat, TNaicker, Felix

10 months 3 weeks ago #820689 by Thangaveloo
Thangaveloo on topic Black Swan Stud Busy few days ahead
Hi PeterD, trust you are well. Any thoughts on KOMMETDIEDING, looks like he may had needed the polytrack on his last run in the Daily News 2000.

Less More
10 months 3 weeks ago #820812 by PeterD
PeterD on topic Black Swan Stud Busy few days ahead
Despite the weather, the Kenilworth Wednesday meeting went ahead as scheduled.
Our highlight was the fluent win recorded by Major Attraction which won going away by a couple of lengths for her 5 th win. She has been bumped up to MR 100 and is looking like a feature race prospect.
Versailles showed good improvement going the extra ground and ran on strongly for 3rd after being dropped out from a wide draw. She is going the right way and should pick up a maiden race soon.
Exceeder and Cape Point both ran very disappointingly.
Major Winter must be the unluckiest horse in SA. For the second time in just 5 runs he clipped heels and dislodged his jockey.

We will be watching the weather closely for the next couple of days as we have runners in the features on Saturday at Kenilworth.
In the Irridescence ( race 3) *Treasure Hunt has to overcome a wide draw in a small but competitive field. She ran below expectations last time but I think will enjoy the extra and at the weights has an ew chance.
*Pretty Betty jumps up in class in the Ladies Mile (race4) Another small field, where the 3year olds meet each other at close to normal handicap terms, but are some 6kg out at the weights with the two older fillies. She is still improving and she galloped nicely in the wet, so I expect her to be in the first 3.
*Helen’s Blush runs in the River Jetez (race 6) where stamina will be the key. Marina is a worthy favourite and will be tough to beat. If we stay the trip in the expected soft going, then we have a fair place chance.
The following user(s) said Thank You: Dave Scott, johnnycomelately, Sweet Coetzee, kt6747, KitKat

Less More
10 months 3 weeks ago #820946 by Felix
Felix on topic Black Swan Stud Busy few days ahead
Well done and congratulations Peter,she looks special,looks to have a lot of heart and fights back when headed.

Less More
10 months 2 weeks ago - 10 months 2 weeks ago #821031 by PeterD
PeterD on topic Black Swan Stud Busy few days ahead
A great ride by Luyolo and a very game performance by Betty. Obviously assisted by the 4kg pull with the runner up, but a super performance nonetheless.
Helen’s Blush hated the going- ignore this run.
Treasure Hunt did too much in front and faded out. Must learn to settle in her races.
Mistress of Means on Friday was stuck out wide from the draw, but ran on really well to get 3rd. Holding form well and the compression mask has really made a difference.
Groban ran a nice 3rd in Mauritius today at long odds. Seems to be regaining his good SA form and should win soon.
No runners for the stud this week until Friday

Less More
10 months 2 weeks ago #821433 by PeterD
PeterD on topic Black Swan Stud Busy few days ahead
Four runners for the stud at Fairview Friday, not easy for any of them
*Twin Falls in race four- handicapper has refused to drop her appropriately, despite no show this whole year. She is likely to be retired soon, but is capable of a place if she puts her best foot forward.
* Seeking Wisdom in race 5 is as game as they come, but a tough task at the weights against those at the top of the handicap. Effective this course and distance, and hoping that she can run into the places. This will be her final run before going off to stud.
* Encryption runs in a small but competitive field. She gets a good draw and a low weight and is our best chance of a winner.
* Secret Dream in race 8 has her 3rd run in PE and having dropped significantly in the ratings needs to show that she still has an appetite to race. Gets a nice draw and just needs a glimmer of her earlier Gauteng form to be competitive here.

On Saturday at Greyville we have * Just for Laughs in race 5. This is a very open race with quite a few lightly raced that can improve. She was disappointing in the Alan Robertson, but has come on from that run, and this is a weaker field. However, a very tough draw to overcome so we are just hopeful that she puts in a decent effort.

Sarah runs in race 6 at Turffontein- she is quite well in at the weights here, but ran well below best at Scottsville last time. Back on her home track,she should be a runner.

If the weather permits racing at Kenilworth on Sunday, we have
* Grey Princess in race 4. A small field, and Ossie Noach gets the best out of her, so an ew chance in an open race.
* Fynbos runs in the higher division of the F&M divided handicap in race 5 and has a good ew chance.
The following user(s) said Thank You: Dave Scott, Lionel, KitKat, TNaicker 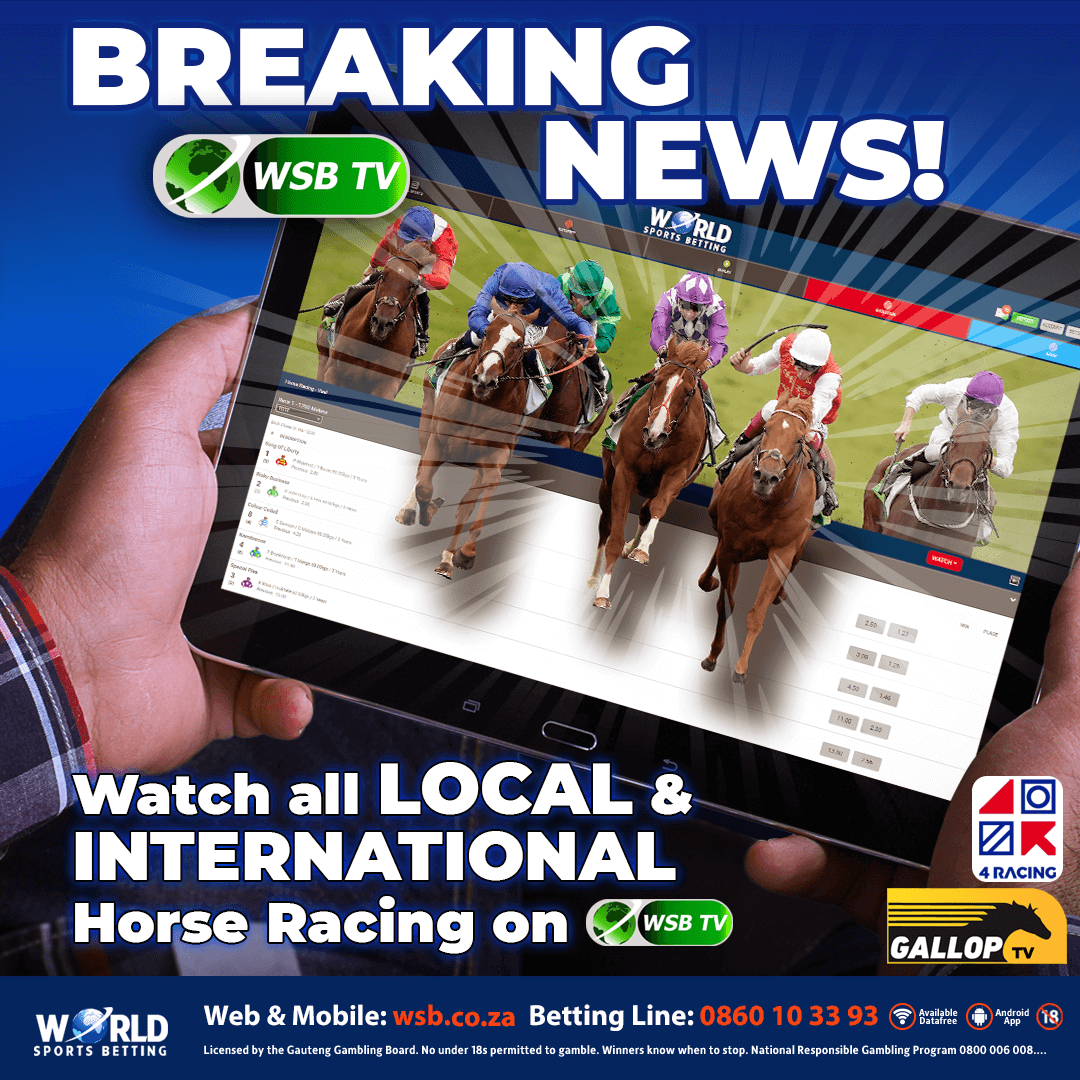